What is Human Trafficking?

Human Trafficking, or trafficking in persons, involves the exploitation of another human being for personal gain. According, to the Palermo Protocol the definition of human trafficking is the “recruitment, transportation, transfer, harboring, or receipt of persons by means of the treat or use of force, coercion, abduction, or fraud”. The International Labor Organization estimates that there are 20.9 million victims of human trafficking globally, with hundreds of thousands in the United States. 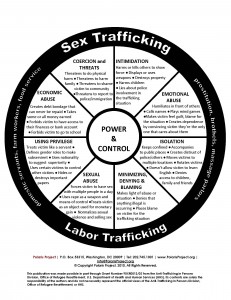 While human trafficking and domestic violence survivors have many differences, especially in the services they require, there is overlap between intimate partner violence and human trafficking. The often used Duluth Power & Control Wheel, seen above, helps to display how many of the same coercive tactics abusers use to control victims are used by traffickers and pimps to control survivors. Tactics like isolation, physical violence, treats, intimidation, economic abuse – especially debt bondage, are all used by abusers, traffickers, and pimps. Every survivor has a unique experience, however the effects of chronic abuse and repeated trauma  can manifest over time in a variety of ways. Many survivors experience not only repeated physical injury, but depression, PTSD, insomnia, and a variety of other personal, social, and mental health issues

Due to the similar nature of the tactics used, many survivors of intimate partner violence are also trafficked by their intimate partners, forced into labor or sex trafficking. This is especially true if the abusive partner is involved in gang activity or other criminal enterprises.

For more information about Human Trafficking, both locally and around the world, take a look at the 2014 Trafficking in Persons report, available here.