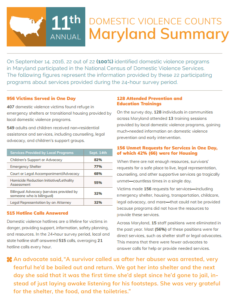 Twenty-two Maryland local domestic violence programs participated in the 24-hour survey, which documented the life-saving services offered by these programs as well as a significant number of unmet requests for help.

The Maryland data included in the report, Domestic Violence Counts: A 24-hour Census of Domestic Violence Shelters and Services, found that there were 956 victims served across the state: 407 domestic violence victims (208 children and 199 adults) were served in emergency shelters or transitional housing; 549 adults and children received non-residential assistance and services, including counseling, legal advocacy, and children’s support groups. Additionally, 515 hotline calls were answered and 128 were educated in prevention and education trainings.

On the same day, however, there were 156 unmet requests for services, including emergency shelter, housing, transportation, childcare, legal advocacy, and more—that could not be provided because programs did not have the resources to provide these services. This 156 unmet requests is up from 76 unmet requests last year. Programs reported that during the last year, 15 staff positions were eliminated, mostly in direct services (56%), reducing the number of advocates available to help victims.